How long has electrolysis been performed?
The first research using electrolysis for the permanent removal of hair began in 1869 in St. Louis, Missouri. It was conducted by an ophthalmologist, Dr. Charles Michel, who wanted a safe and effective way to remove ingrown eyelashes which frequently led to blindness. He published his first scientific paper in 1875. Since then electrolysis has been proven by knowledgeable physicians, hundreds of peer-reviewed scientific papers, the AMA and over a million satisfied people as being a permanent and safe method of hair removal.

How does electrolysis work?
In the electrolysis process I gently insert a small pre-sterilized, single-use, disposable, probe into your hair follicle alongside the hair. The tip of the probe delivers a small electric current from a sensitive electronic device called the epilator to the root of the hair, also called the dermal papilla. The hair root is destroyed either by heat or chemical action or a combination of the two.

What areas of the body can be treated?
Hair can be removed from almost any part of the body. Common areas for women include eyebrows, upper and lower lip, chin, chest, breasts, abdomen, legs, bikini line, hands and feet.
Men often have hair removed from the hairline, beard line, shoulders, back, chest, ears and nose. Electrolysis is helpful for treating ingrown hairs which often cause irritation in the beard area.

How long does electrolysis take to achieve permanency?
Electrolysis requires a series of treatments which varies from person to person and is dependent on many factors. The density and coarseness of the hair, as well as the total area to be treated are very important. How well you tolerate treatments and the frequency of the treatments affect the overall success. The cause of the unwanted hair and the temporary methods of dealing with your hair in the past will affect treatment time. Many hairs will be permanently removed after the first treatment while some will require additional treatments to achieve permanency. Treatments will be more frequent in the beginning and less frequent later on.

END_OF_DOCUMENT_TOKEN_TO_BE_REPLACED

Laura manages to make the experience as pleasant and pain-free as possible. She’s a true professional!

Laura is a dedicated professional with the emphasis on dedicated. She worked tirelessly to provide me with a great outcome. Not an easy feat, considering the extensive electrolysis a transgender women such as myself requires. In addition, she is extremely knowledgeable about her profession and involved with continuing education and advancement in her field. I would recommend her without hesitation for your electrolysis needs while in Key West.

I think Laura is perfect for this profession. She possesses the perfect balance of technical knowledge, compassion and customer satisfaction which immediately made me feel comfortable with my treatment. 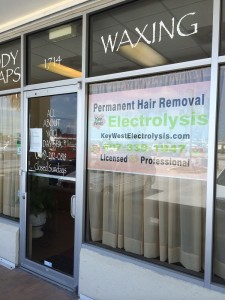